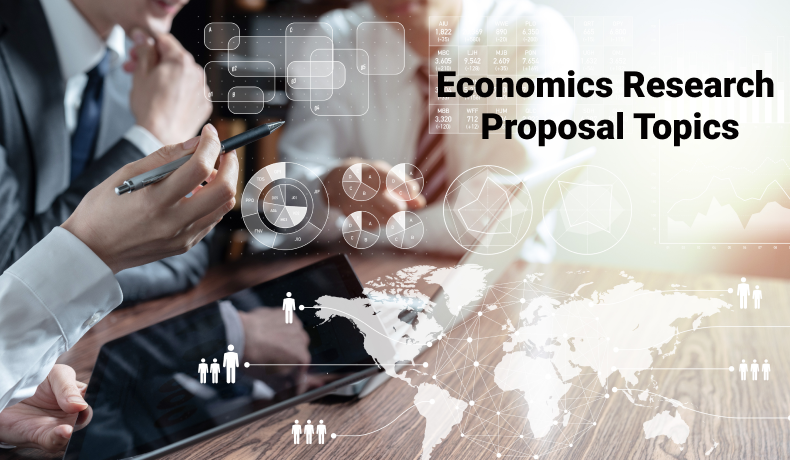 Understanding of the Research Proposal

A Research Proposal is a type of academic paper, where students have to prove the necessity of studying a certain research point, problem, or question. In other words, with the help of writing techniques, you have to give a strong justification, why this or that research topic should be studied.

Sometimes research proposals are written by a scientist in order to receive grants or funding for the in-depth study of some phenomena. Meanwhile, students also often get the task to write such scientific papers. It can be for the following reasons:

To write an Economics research proposal, you need to understand the main economic phenomena and processes in the world. You need to be aware of economic trends and their causes, work with statistics and news, study past events that influenced the present state of things, and compare a lot of viewpoints.

But don’t be afraid of the beginning! An interesting economics research proposal topic may motivate you to dig further and find fast facts and clever ideas for the paper. Here students may have 3-ways scenario:

How to choose a research proposal topic, which will be both interesting and fresh for investigation? Today we will try to help you with some useful ideas and instructions to facilitate this task.

Most diverse topics for Economics Research

Famous brands in the global economy

Economics and Religion in modern society

Guidelines: How to Write a Research Proposal

Economics requires expertise and broad knowledge to write about. Although students study this subject during the classes, it may not be enough to grasp the meaning of main economic issues, processes, causes, and consequences in the world.

The economic sphere is so large that it’s impossible to cover the whole ground. So, students often feel desperate when it comes to conduct and describe economic study research or provide analysis. The following pieces of advice are aimed to facilitate the process of finding proper economics research proposal topics and proceed to actual work:

Below there are sections, which must be present in your Economic Research Proposal:

Nowadays, most aspects of our lives are connected to economics. That is why it is so important to never stop investigating this field for the sake of human wellbeing. Maybe it is your research proposal that will make a contribution to the further development of economic science.

Writing a Research Proposal on Economics is a good deal of work. Writing it at high-quality standards requires not only time but also an expertise in the field and a strong desire to succeed.

Students are most often occupied with numerous tasks, which must be delivered when scheduled. Don’t stress out because of time pressure or writer’s block – just let us help you with your Economics Research Proposal.

Reasons to choose us for your Research Proposal paper: